At the moment I am holding the twentieth lecture series on the history of space travel in the Studium generale at the University of Mittweida. Occasionally I give extracts from it in the USA and France in English. Slides, videos and "things to touch" are always included. All of the 14 lectures are easily available as lectures for listeners of all ages.

Could it have been otherwise?
Almost everyone knows the historical words of Neil Armstrong "The Eagle has landed". Thousands of books and hundreds of thousands of articles have been written about the first moon landing. But weren't the Soviets close to being the first? Couldn't it have been Alexei Leonov? There were enough serious hints. The first moon orbit was preferred because the Russian moon rocket had been discovered in Baikonur and "Luna 15" Apollo 11 nearly stole the show. Then the Soviets would have had a few hours more lunar rock on Earth than the Americans...  And what about the moon? The author has spoken with many contemporary witnesses on both sides and made his own explorations. 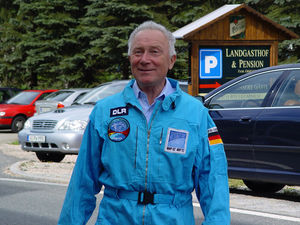 Sigmund Jähn. 40 years of Germans in space. A personal view
The lecture draws a picture of man and not only of the cosmonaut in pictures and information, which are mostly quite unique.

Together with them it denied countless meetings, during mutual attendance ?behind the window blinds? may look and thereby amazing to the day light brought.

Juri Gagarin - Triumph and tragedy
50 years after a human has dared to climb into a small spaceship and leave Earth for 108 minutes, nobody speculates more about anyone than about the cosmonaut himself. Was he really the first? How did the hero, who is celebrated all over the world, live? Did he become rich then? What else did he have in mind? And above all: Why did he crash only seven years after his mission?

The author has been dealing with the subject for over 30 years, interviewing numerous contemporary witnesses, including many cosmonauts and comrades-in-arms. And he has visited the cosmonaut's places of activity: Baikonur, where he started, Smelowka, where he landed, the star city, where he lived and worked, the crash site at Nowoselewo or places he visited.

In addition, the author has been teaching space history at Mittweida University and other universities for a decade and a half and owns the world's largest private space collection, according to Guinness Book of Records. In the ambivalent Peenemünde, where modern rocket technology began, Mr. Römisch designed a Gagarin exhibition with over 250 objects authorized by the Russian side. It had almost 120,000 visitors. In 2011, he processed all this into a lecture that certainly contains a lot of new things and portrays Gagarin in his time under all the complicated political and technical circumstances.

Length of lecture (Powerpoint): approx. 75 to 90 minutes
Required technology: beamer, small table, micro+amplifier if necessary
Hardware to marvel at (if not on the road at exhibitions): training glove SK-1, earth from the landing site, first Gagarin photo on the ISS, memorabilia...

To Mars instead of Mallorca?
The future of space tourism

A new Powerpoint presentation with 3D effects and other souvenirs.

The next destination for mankind (after the moon) will probably be Mars. With only one third gravitation compared to the earth, one could well settle in. But what awaits us there? Are there really worthwhile tourist destinations? And if so: When will it finally be time and do I have to start saving now?

One could also travel cheaper to the space station ISS (or to a space hotel) or even just do ballistic flights. There you would be weightless and could see our home planet from above. Will this be the coming mass tourism?

An enjoyable journey with first backgrounds.

Were we really on the moon?
Again and again there are conspiracy theories, so also to the manned moon landings. And some things seem to need some explanation.

Is it really so that the USA flag blows in the wind, which cannot exist on the moon at all? What about the shadows, the temperatures and strange light sources? Was it really possible to leave the earth with the technology of that time? Is it necessary to look at all the "forgeries" individually or do some knowledge of history, logic and physics help?

The author has spoken with moon astronauts as well as with technicians of the ground control in Houston, but also with the Russian side, which would have liked to conquer the moon itself at that time. A space training session in the star city near Moscow gave him the impression of how to move on the moon in a space suit. Countless interviews, some hardware (like real moon dust!) and more than 50 years of experience in space travel provide a solid basis for a certainly not boring PowerPoint presentation.

Content: Since the time when Erich von Dänicken thought to have found evidence for visits of extraterrestrial beings on earth, the author of the lecture is travelling all over the world to see them with his own eyes. This time he flew over the giant pictures of the Nazca plain, visited old Inca cities and climbed gigantic stone blocks. As a lecturer on space history, Tasillo Römisch also draws comparisons to current and future space transports. But the most important thing: The many contacts to the people in Peru. This brings history to life.

Are you a renowned company still looking for a suitable motivational presentation for your executives? Here he is:

I would love to be an astronaut
- What do I have to do? Good luck or many millions?
Hard training in many countries and three languages

How is this at the start and how do I behave in weightlessness?
What is there to eat "up there" and how do I use the toilet?
Great view and a worthwhile psychological effect, which has it in itself.
After the landing is not yet over...

No Powerpoint necessary, just a table for all the hardware and a brave man wearing a space suit!

If desired: trying Space Food together (time window between 60 and 120 minutes)